Effective Communication Skills: Use Words To Get Ahead In Your Workplace (w/ Examples & PDF) :: Kopywriting Kourse

Effective Communication Skills: Use Words To Get Ahead In Your Workplace (w/ Examples & PDF)

Both of those statements above didn’t make a lot of sense did they?  That’s because you’re not a dog or a computer.

If I said, “Hello there” instead, you would’ve easily understood what I was saying. It’s just a matter of communicating something in the right way.

The point of all communication is transferring information from one place to another.

You can communicate with another human:

You can communicate with a computer:

You can communicate with Dog:

The human, the computer, and the dog all understand input in a different way.

For example, let’s say you want to input the words into a smartphone AND a standard desktop computer.  What you’re trying to input is the same, but the actions you take to enter these things are slightly different:

Humans are essentially what our brains make us.  And the human brain is just a re-active computational machine.  It “learns” by making generalizations about things from the past:

For example, below are two different brains.

Brain with a good life:

Brain with a hard life:

Looking at the experiences that shaped both those brains…..it’s almost illogical to think they’ll both react in the same way to an input!

Yet this is the scene we have to navigate.

It’s why people tend to gravitate towards people similar to them.
It’s why people get along easier when they have a lot in common.
It’s why one person thinks something is funny, and another thinks the same thing is offensive.
It’s also why we can learn A LOT from people different than us.

If you can communicate well, you can do a lot of things:

You can use this talent for good or evil.  Whichever you choose.

You can also totally screw up a lot of things through bad communication (such as over-complicating a simple memo at work and confusing people more than helping them).

So let’s explore some tactical ways to improve communication:

Watch yourself smile in front of a mirror:

Know why they have mirrors in dance studios?  So you can instantly see what you’re doing and correct the wrong movements.

Sometimes the way you FEEL doing a movement, doesn’t actually LOOK that great from an outside perspective.

However, most communication (ummm….probably ALL communication) does not happen in front of a mirror.  It happens when you’re not looking at yourself.  In fact, usually you’re too caught up in the situation to think about your individual movements.

A few years ago a friend of mine in the communications space was walking with me to a restaurant one Tuesday afternoon.

As we were walking I noticed nearly every guy and girl that walked by us was smiling at us.

He smugly looked at me and said, “Ok, the next person to walk by, try smiling at them.”

I saw a woman passing by…..looked straight at her and cracked a smile.  NOTHING HAPPENED.  This is why: 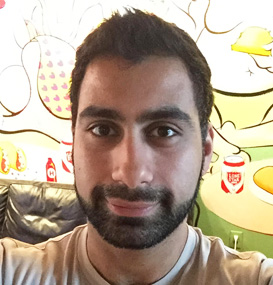 My friend was like, “Ummmm, that’s not really a smile.”

What’s crazy is: I genuinely thought THAT WAS a big smile!  In my head I could feel that I was smiling because my mouth muscles would rise! What I felt internally about my smile, clearly didn’t reflect externally.

He went on to give me this analogy:

“Imagine you’re backpacking through Europe and completely randomly see your friend Jason from back home.  You’d be totally surprised by this and crack a HUUUGGEEEE happy smile when you see him!   Do THAT to the next person walking by.”

So I tried to imagine this situation happening in my head, and I cracked a HUUUGGEEEE smile to the next woman walking by as if she were a longterm friend.

As we passed by, the woman smiled and actually STOPPED to talk with me (because based on my body language she thought I knew her)…..and this came as a huge surprise so I panicked and kept walking! 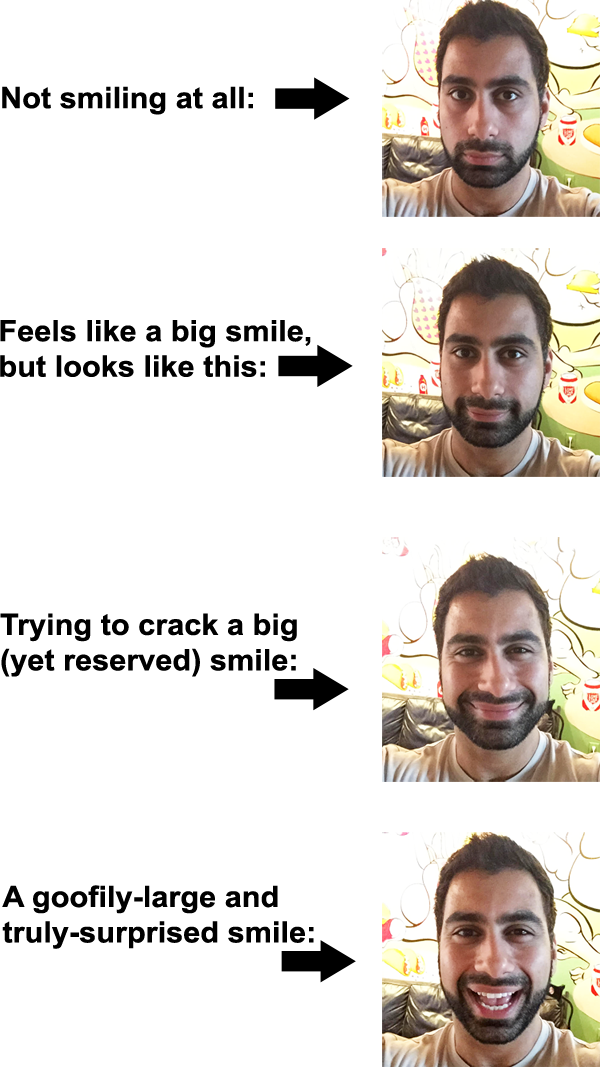 (With that bad lighting and a beard, perhaps I shouldn’t be smiling at ANYONE)!

The “Smile” I thought I had all these years sucked.

This means the communication I was giving off internally, was never the same message being given off externally.

This is why practicing what you look during a conversation in a mirror can be really helpful.

Use analogies with people (or just reverse the situation):

For some reason one of the most useful things someone can explain to me is, “Imagine if I told YOU that (insert thing I did wrong here).”

It seems analogous to teaching a kid not to hit another kid……by showing him what it feels like to get hit.

Counting to 10 in your head before speaking:

About 5 years ago talking to a guy who literally jumped into every single one of my sentences in a weird way.

Me: One time I went camping…..
Him: Holy crap I went camping too this one time, and these squirrels stole the :::blah blah blah::::

He interjected at every sentence and it annoyed the crap outta me.

I remember this striking a chord with me, because I felt like I ALSO DO THAT in conversation.

Realizing this years ago, I simultaneously felt sad and happy about this.
Sad because I realized this guys annoying habit was something I do.
Happy because now I realized it, and can make a change.

It feels like my brain is hyperactive sometimes, and anything out of someone’s mouth I can relate a story to.  I realized from a few experiences this could be highly annoying.  The worst part is, in my head I thought I was contributing to the conversation because I enjoyed talking to the person!  It was actually my way of telling them, “I enjoy your company because I am engaging in your conversation!”

In reality, it could turn some people off.

So I developed this easy trick of counting to 10 in my head before responding with my own feedback.  It was an easy way to keep my brain occupied with something besides formulating an IMMEDIATE response.

I started noticing this worked ESPECIALLY WELL when listening to friends talk about something serious or sad.

Noticing the “vibe” you’re giving off:

Here’s a funny thing I had happen.  I frequently drive back home and visit my family.  Years ago sometimes I’d notice we wouldn’t talk that much when we got home.

Then I figured it out.  And it was a super-stupid reason caused by ME.

I would walk in the door, parents would greet me, I’d go upstairs and put all my stuff away, then come back downstairs and do the following:

Now…..I didn’t MEAN to look this way, but from an outside perspective, I CLEARLY LOOKED like I didn’t want to be bothered with conversation!

It’s hilarious to think I would be typing on a phone, reading a magazine, and watching TV at the same time……and then EXPECT someone to say “So Neville, what’s going on?”

But this kind of stuff happens all the time.

Someone wants people to approach them at a conference……but they look standoffish by not looking friendly and typing on their phone.

Someone wants to connect and have a great conversation……but they constantly interrupt and talk about themselves.

Someone wants to desperately show they are competent and smart……but they talk too much and it makes them look foolish.

Ask Questions You Actually Care About

You probably already know that to have better conversations, you should ask open-ended questions. After all, people LOOOVE talking about themselves.

The problem is, most people default to the first boring questions that pop into their mind.

This may seem obvious, but the trick to having good conversations is asking things you actually want to know the answer to (vs. just asking a question for the heck of it).

With strategic questioning, YOU control how interesting/boring a convo is. 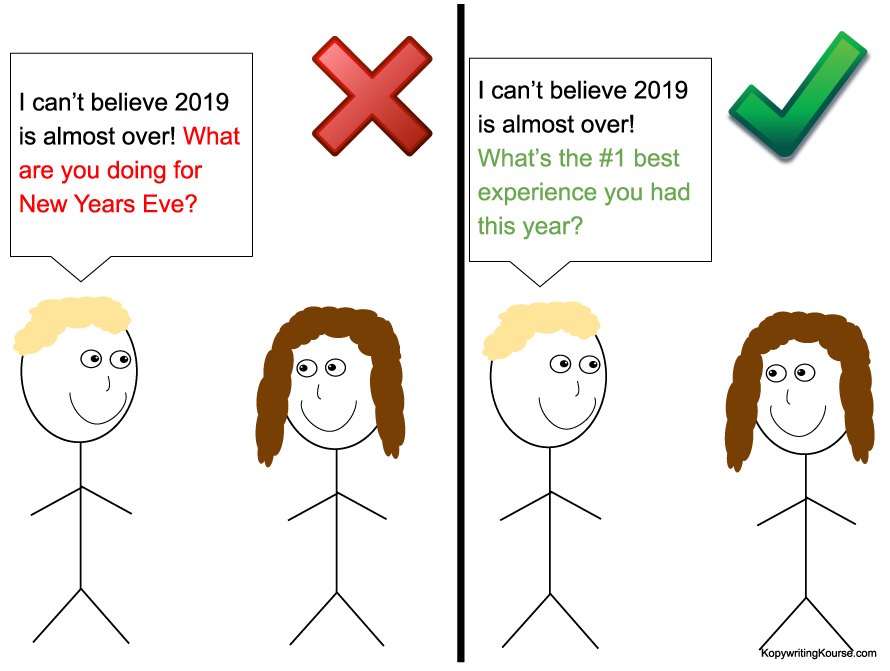 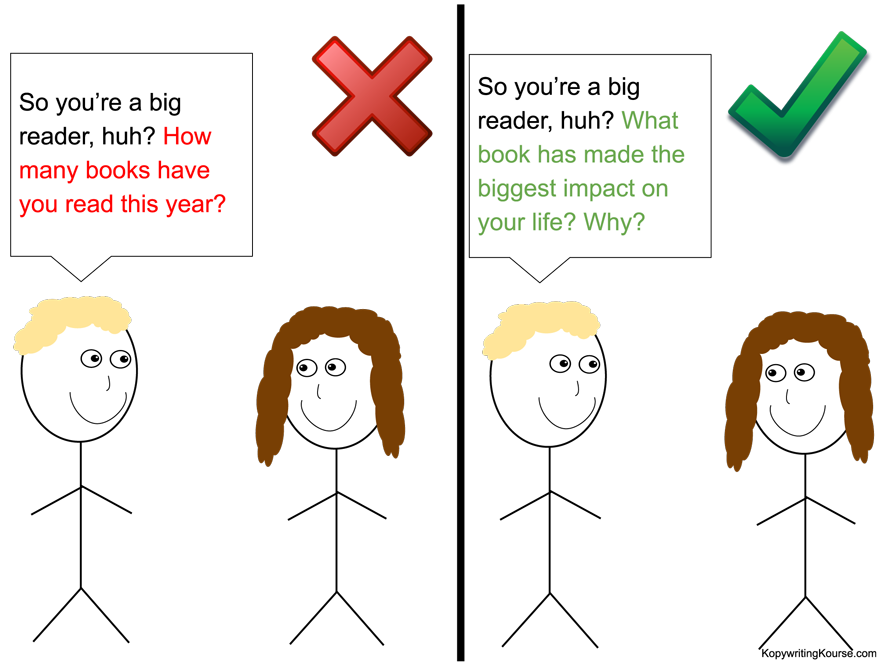 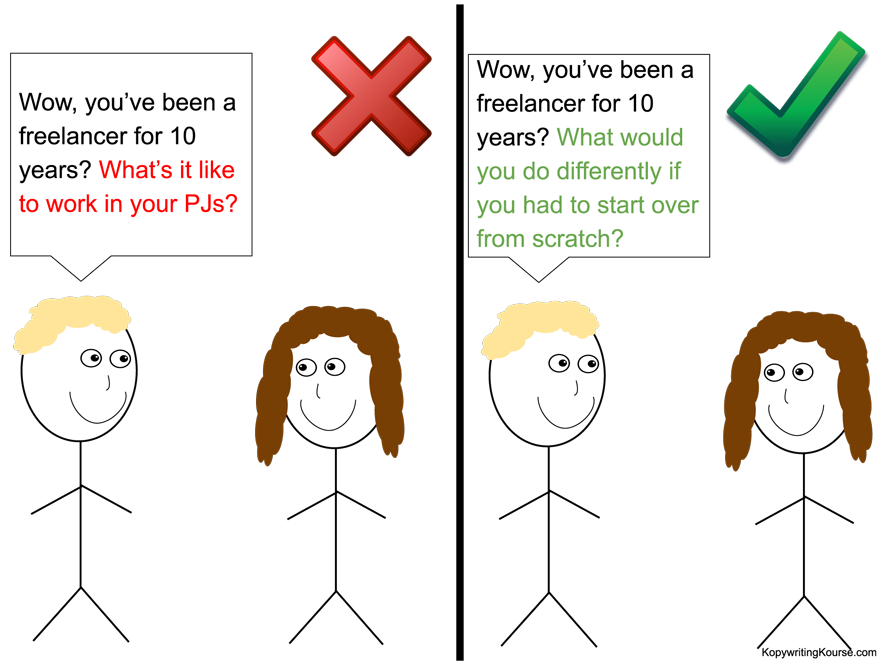 If you’re struggling to think of good questions on the spot, try memorizing a few prepared questions that are general enough to ask anybody (books, life experiences, advice, points of view, etc).

With a bit of practice, you’ll never have another boring conversation again. 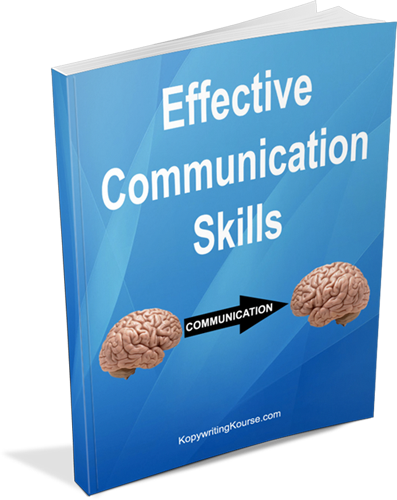 I will be adding more and more communications tactics to this post (I want to develop a “collection” of them).  So please chime in with yours below!

P.S.  In the comments, let me know which one of these you are most guilty of, and how you’re going to change it (Constantly interrupting, appearing too stand-offish, other problems).

I am personally interested in this stuff and LOVE hearing your problems & solutions!