Problems with the idea of Passive Income 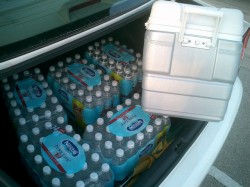 So I told you in these other posts (first, second) how I knew my income would be higher forever.

But here was the problem:
I STILL HAD TO WORK FOR IT.

Now don’t get me wrong….I fully expect to always “have to work for it” my entire life. But here’s a non-business example of what I’m talking about:

From my blog NevBlog.com, a lot of people knew my personality and story from all sorts of experiments and hijinks such as:

–The time I got a homeless guy to sell bottled water for me.
–Those 5 days I went homeless on the streets of Austin.
–That post and video I made how I crash parties to meet rich people.
–That time I bought 100 lottery tickets to see what would happen.
–When I illegally conference-crashed and met the Prime Minister of Malaysia.
–When I changed a street sandwich board sign and got 50% more walk-in’s.

Trying to get some-o-dat passive income? Sign up for my newsletter and I send out a ton of methods to make it.

But what if they DIDN’T follow me when these things happened??  They would never know about any of this stuff!!

So how do I get these posts out to new subscribers who JUST NOW found me?

Well there’s a thing which I call “The Magical Email Slave Machine” which is what’s commonly known as an email autoresponder.

You see, an autoresponder is simply a program that sends out emails to people who just signed up to your email list.

Simple concept. But one helluva a POWERFUL tool for selling.

My hijinks and experiments were well known to the people currently subscribed via email to NevBlog, but what about the people who signup for those lists NOW?

They’re not aware of this famous Neville Medhora!

No. They must be educated and shown what I’ve done.  But I couldn’t manually do this every single day.

So as an experiment, I tried out making an autoresponder for the people who signed up to get my blog posts sent to their email.  Here are the numbers: 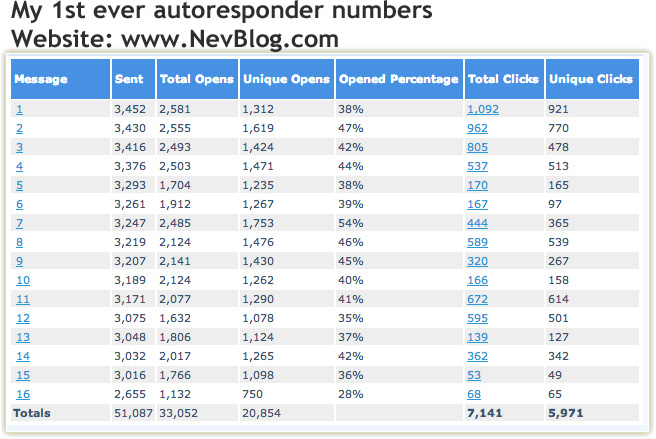 It wasn’t planned whatsoever.
It was poorly formatted.
It didn’t flow.

In general it was pretty bad.  But even despite this poorly planned disaster of an autoresponder…..within the 1st few months, I started getting emails like this: 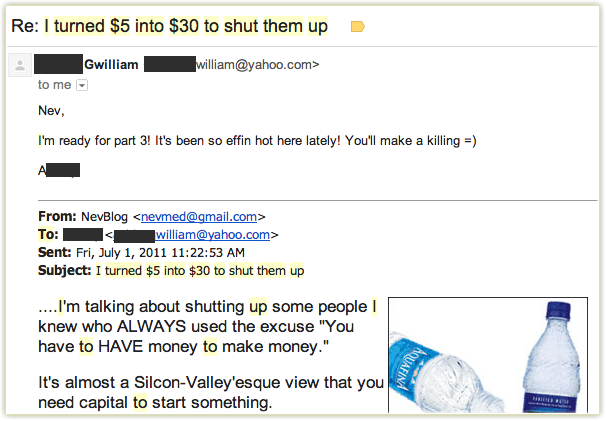 I couldn’t believe how many people were LOOKING FORWARD to these emails I was “sending” them….and they were even interacting with the emails as if it was ME physically sending them out!!

Every time someone new signed up to my email list, I could almost guarantee they’d never miss one of my “greatest hits” blog posts.  This introduced me to thousands of new people over the years….without me doing a damn thing (aka “passively”).

Basically I did NOTHING while this email autoresponder did all the work.

That’s the power of an autoresponder!

This first autoresponder I made was just to show people old blog posts. I still hadn’t thought of using it to SELL something.

Now,
What if instead of just using this autoresponder technology to remind people of how cool I am with random blog posts……I could show them why they would want to BUY something!?!?!?!?!?!?

For example:
I have this thing called the KopywritingKourse (I swear I’m just giving you an example here and not trying to sell you something):

What if when people signup to my page to learn more about Kopywriting, they are immediately sent a page that shows them HOW they can write copy that converts 3x higher than their current copy?

Increasing a business by 3x is a pretty good deal right?

Well what if the NEXT email I send them shows them how to write headlines that have higher open rates?  This will help them get even MORE revenue.

And what if the NEXT EMAIL AFTER THAT shows them how to structure each email so that it gets the most amount of interest from their customers?

Obviously this will catch their attention better than just trying to shove a $69 course down their throat.  And because they got all this awesome information, and know the value and context of the thing we’re selling……This is what we called a “warmed up customer.” 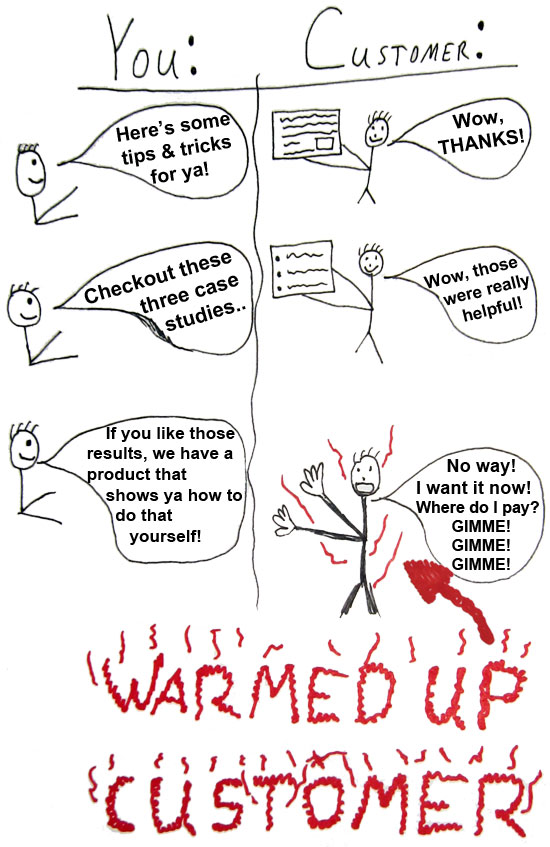 Even small groups of “warmed up customers” outperform gigantic lists of “random emails” who have no context of what you’re selling.

……and what if we could create these “warmed up customers” every single day without moving a finger!?
That’s what an autoresponder can do for you.Tomorrow imma show you how to use these to make your business more passive (I don’t mean “Do nothing and make money” bullshit pipe dream…..I mean how to “warmed up customers”  without having to do it manually).Pay close attention to this stuff. It will apply to EVERY business you go into.
If you wanna know more about this, I highly suggest you take a second to consider investing in my Autoresponder Kourse.