I love a good business turnaround story, and a few years ago I got to be a part of one.

It started when I found a brewery owned and operated by a remote monastery in New Mexico. I’d heard it was making great beer, but I couldn’t find it at my local stores and bars.

So, like any good beer nerd, I made the two-hour drive from Santa Fe to Abiquiu, NM, to the Christ in the Desert Monastery, home of Abbey Brewing Company. I met some of the monks, settled in at their taproom, and immediately discovered the best beer I’ve ever had. 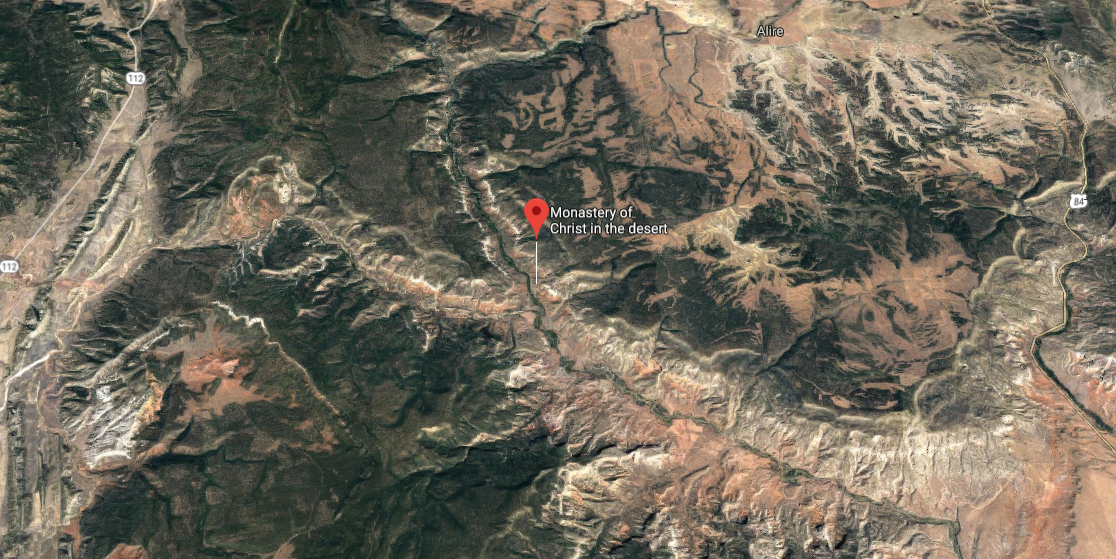 The thing is, I was drinking alone. Don’t get me wrong – great beer and beautiful views go a long way, but there’s something sad about an empty bar. As far as startup omens go, it’s one of the worst a brewery can have.

I left the US a few days later and didn’t really give it much thought. I’ve been around my fair share of drinks startups, and frankly, I sort of assumed Abbey Brewing Company was going to fizzle out.

But, I was wrong.

Fast forward a couple of years to 2015. I was back in Santa Fe, and Abbey Brewing had a totally different energy about it. I found its flagship beer line, Monks’ Ale, everywhere from grocery stores to house parties and beer bars.

Alright, I was curious – what had changed? How had these monks taken the brand from an empty taproom in the middle of nowhere to suddenly being everywhere?

To answer that question, I found the head brewer, Berkeley Merchant, and started working for the brewery.

Mr. Merchant turned out to be more than just a talented brewer and brewery partner, though. He was an engineer, a chemist, and a highly accomplished tech entrepreneur.

When sales stagnated at the monastery, Merchant came out of semi-retirement and transformed Abbey Brewing Company from a net loser lacking local traction to a popular, profitable brewery.

He restructured some key operations, created some non-beer revenue streams, and most importantly, he made a big tactical shift with his marketing and sales strategies.

The Problem: Not Enough Sales + Momentum

Before we get to the nuts and bolts of Abbey Brewing’s marketing shift, let’s clarify why sales are such a problem for breweries in the first place.

When a brewery starts out, it’ll often be caught in a tough Catch-22.

In most of the US, beer cannot be sold directly from the brewery to customers. The brewery has to sell to a middleman, called a distributor, who then sells to commercial retailers like liquor stores and bars, who then sell to actual customers.

It’s called the three-tier system, and it’s a major challenge for any new brewery.

The problem is, the distributor is usually a big company representing many brands that are competing for limited shelf space at stores and limited beer taps at bars.

Those spots don’t open up easily.

Why would a commercial seller replace steady sales with an unproven name?

The only way to convince most sellers is to build grassroots support from local beer drinkers. You need them to go to those bars and stores and start asking for your beer by name.

Then they’ve got to follow through and buy the beer enough to demonstrate sustained demand.

So while most brewers start out as passionate beer makers, they’ve got to quickly develop their sales chops. They’ve got to connect deeply with a set of buyers and develop them into a fanbase that’s going to help promote the brand organically.

The more I learned about this model, the more it started looking like a lot of online projects I’d worked on as a copywriter.

New sites struggle to outcompete established sites for relevant traffic. And it’s not just about getting people to visit a site once, it’s about building sustained engagement and a loyal audience.

The Solution: Go to where your customers already are

Stick with the digital example for a second. If you were in charge of creating traction for an online brand with little name recognition, where would you start?

I know I’d start lassoing relevant readers from a related forum or social media outlet. In short, I’d go to where I know my customers already hang out and engage with them there.

Abbey Brewing already tried direct sales at their monastery taproom, but it was simply too remote to generate the kind of sales needed to build traction.

The only remaining option was to sell direct to drinkers at beer festivals.

That brings up another challenge.

Festivals are great chances to connect with beer lovers, but there’s still a lot of competition.

Let’s say you’re a bootstrapping brewer. When you show up to a beer festival, you’ve got to compete against dozens of your most direct competitors.

It’s one thing to get a beer nerd like me to try a new craft beer over a big brand name. It’s an easy sell.

But what about when the beer nerd has 20 craft beers to choose from? Much tougher!

And, frankly, many brands execute poorly – they end up losing money at festivals and come away with no idea if they’ve boosted their brand or why buyers chose other beers.

For a bootstrapping startup, standing still is not a viable option.

You’ve got to show up, generate a profit (or at least breakeven), and create a measurable bump in your fanbase.

Remember, it’s not just about getting someone to try your beer. You’ve got to convert that person into a fan – someone who’s going to buy your beer, ask for it by name at bars and stores, and rave about it to his friends.

Oh – and you’ve only got a few seconds to a couple of minutes to make that conversion.

How to convert ideal buyers into committed fans

The first step in creating an effective sales strategy is getting specific. Who’s your ideal buyer?
In our case, Abbey Brewing had a clear idea of what that person – let’s call him Bob – looked like:


In short, we were after typical craft beer bros. My people!

Building out ideal buyer avatars is a great exercise, because it sets you up for relevant messaging, deeper connections, and better sales. We want our fans to immediately say to themselves, “wow, they get me!”.

Getting into the craft bros’ heads is a great first step, but we couldn’t stop there. Remember, all we’ve done so far is set ourselves up to attract people who prefer craft beer over the standard mainstream selection.

Festivals are collections of competing craft beers, though.

That means once we identify our ideal buyers – our Bobs – we’ve got to convert them into buyers (and fans) right in front of our direct rivals.

To do that, we had to go a little deeper than a standard buyer avatar. We had to create some decision-making context and think about the drivers behind Bob’s actions. Maybe even get a little emotional.

What does his ideal experience feel like? How does he want to be treated? What’s he getting out of choosing our beer over the other craft brands?

This is the secret sauce. Nail this, and we’d both outcompete the other craft brands and create powerful conversions from buyer to fan.

The more Bobs we served, the more we started seeing common elements coming through:

We took those elements and built the sales experience around it. Here’s how we translated each point into a much better engagement:

Finally, we gave Bobs business cards with our contact details. If there were particular questions we couldn’t answer on the spot, we made notes….and actually followed up.

By the time I joined Abbey Brewing Company, Berkeley Merchant had been doubling down on festivals for several years.

He’d optimized operational costs like transportation and created detailed, written processes for his salespeople to follow. After each festival, we would run through a structured performance review and bring up specific positives and negatives, then work those into future actions and improvements.

Our festival performance was a well-oiled machine, and it showed.

Unlike many competitors, we always made a profit and we added real people to our growing email list and social media database. The more Bobs we served directly, the better we got at speaking to our ideal buyers.

This paid off at festivals, where we’d often walk away with awards, new fans (and a way to connect with them on social or email), and an ever-improving understanding of our Bobs.

The positive effects of great direct sales didn’t end with each festival. Our distributor saw upticks in orders from retailers around the festivals we attended. Bobs, armed with our retailers’ listing info, were following through and asking for Monks’ Ale at their local stores.

That’s exactly the sort of momentum that eventually turns into traction. The brand goes from being “another new brewery” to “oh, Abbey Brewing Company? Yeah you’ve got to try their beer. I love their _____ (specific beer)”.

That sort of energy rarely manifests from the Field of Dreams strategy – “build it and they will come”. Food and drink businesses are notorious for investing tons of money in building out a location and then launching to….nobody.

It’s a heck of a lot better to invest in great relationships with real buyers. Great service is the best way to convert a customer into a loyal fan.

And in order to make that conversion, you’ve got to focus on who you’re serving. Get specific about your ideal customer and your sales (and marketing) will become easier and much more effective.

Even the most basic buyer avatar templates – and there are a ton of them online – will help you build your messaging around a specific persona, defining a target audience versus a sea of general consumers.

But in a high competition niche, it’s not enough to just position your Bob against “everyone else”.

You’ve got to dig deeper and consider Bob’s motivations with some context. If he’s choosing between your brand versus your top three competitors, what’s going to tip the scales in your favor? Why?

The more specific you can get, the better.

It doesn’t matter what niche you’re in. Define your Bob and go to him. Get in his head, consider his choices, and serve him better than anyone else. Here’s a couple key questions to ask (we also have a full client questionnaire you can use here):

Cheat Sheet Summary of how to identify your Bob: 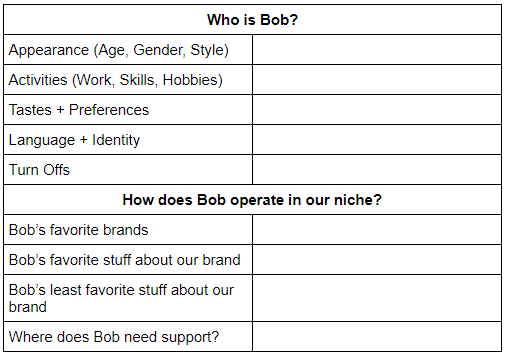 You’ll create a memorable sales experience that’ll turn your ideal customer into a loyal fan and repeat buyer. It’s a much better path to traction than just launching an untested business into the wild. 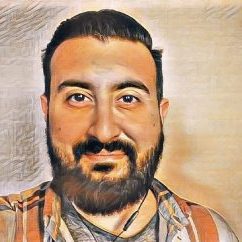 Before you leave, did you know we make a great training course and even help you write copy whenever you need?
Our trainings are quick, actionable, and even just picking up one new concept can make back your entire investment quickly. It trains you and colleagues on: In the Member's Area you also get unlimited copy critiques, unlimited help, unlimited live office hours, and unlimited reviews of your content. If this sounds like something you'd like to start learning, take a few minutes to checkout The Kopywriting Kourse.

P.S. Have you figured out who your Target Customer Profile is (aka your “Bob”)?

If you need any help with it…ask your questions in the comments below!