Sell Me This Pen: How I sold ,220 of sports training (knowing NOTHING about sports) :: Kopywriting Kourse

Sell Me This Pen: How I sold $2,220 of sports training (knowing NOTHING about sports) 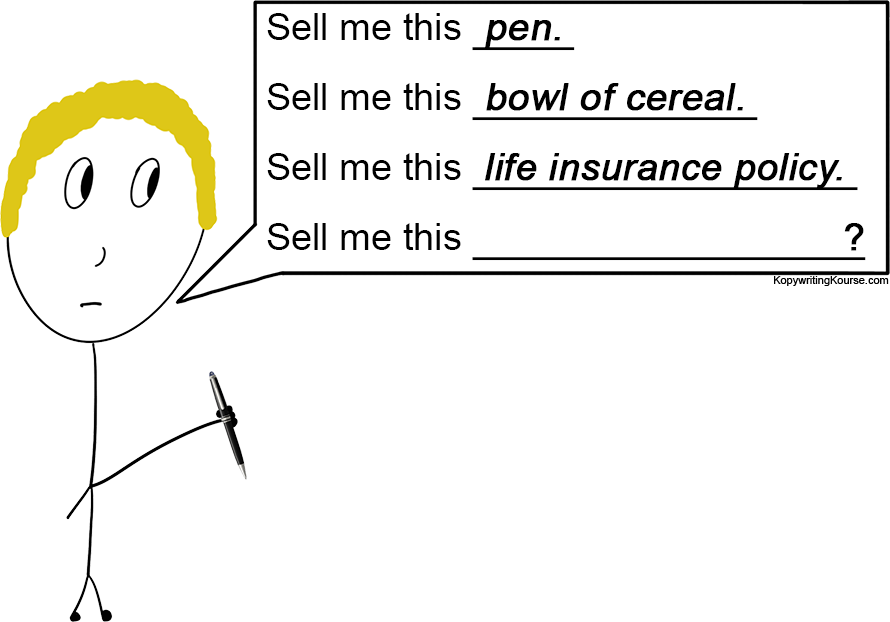 A talent of a great copywriter is the ability to sell almost anything, even if they currently know NOTHING about the product.

There’s this famous scene in Wolf Of Wall Street where the star of the movie (a scammer named Jordan Belfort) says to someone at a conference:

He hands them a pen and expects them to sell it to him.

I personally think it’s kind of stupid, and the techniques used to “sell the pen” are very high pressure sales tactics.  It’s personally not how I would want to be sold.

HOWEVER, it doesn’t matter what the object you’re selling is.  The point is knowing HOW to sell.  Then instead of learning just how to sell a pen, you can:

So without knowing ANYTHING about sports, I was able to extract the information needed to sell advanced football training to football coaches.

For this experiment I had a team of radiologists scan my brain, and here’s the scientific results of how much of my brain is dedicated to knowing things about sports: 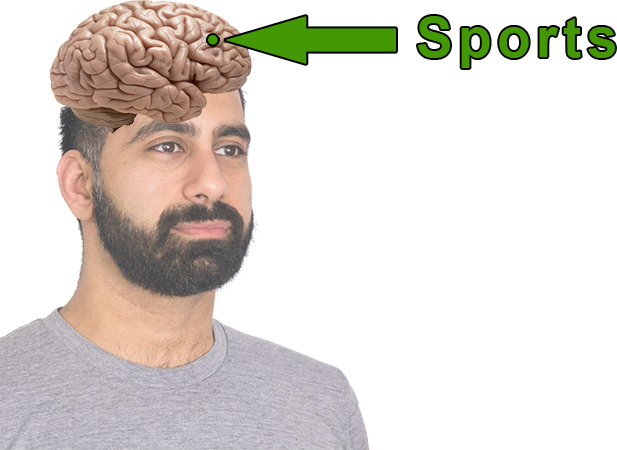 I sat down with the owner of CoachTube (a site that sells training for sports coaches and their teams),  and in exactly 1 hour together we made a quick promotion and emails that generated $2,220 in sales from sports coaches.

This is a common thing I tell people: If you learn proper copywriting, you can sell anything no matter which industry.

Can a copywriter who knows ZERO about football successfully sell to a group of people who are obsessive about football?  Let’s find out.

Below, with the help of the owner of

, we will craft an offer, write an offer email, and write a Closer email.

Step 1.) Figure out the offer:

I asked the owner of CoachTube what a “hot topic” was at the moment.  He said he went to a football coaches conference recently and pretty much all the buzz was about how to do R.P.O. plays and how defend against R.P.O.’s.

I asked him if a coach wants to fully learn about R.P.O. plays and teach his team about them, which are the MUST HAVE trainings we could bundle together on the topic.

We took these training courses and put them in a package called the “RPO Domination Bundle.”

At this point, I still didn’t even know what the hell an “R.P.O.” was…..but as the copywriter, it didn’t matter JUST YET.  I was going on the instincts of the owner of the company who intimately knew what sold well, and what the best courses were.

Sidenote: I hate the name “RPO Domination Bundle”, but after hearing what football coaches respond well to and how everything in their career is about competition, I agreed “domination” would fit well.

Here’s the landing page they whipped up in a few minutes.  Nothing special.  It was literally just the images of the trainings with copy/pasted descriptions of each:

This was an extremely simple page with essentially no design or fancy sales page stuff…..just a list of the trainings in the bundle.

STEP 2: Write an email for the offer:

At this point I still had no idea what an “R.P.O.” in football was.  However I’m about to speak to a group of football coaches through email, so I better learn SOMETHING about it quickly!

I proceeded to ask the owner of CoachTube some key questions which would help me fill in my email:

Neville: “What are the main benefits for coaches to learn RPO’s?”
Loyd: “Right now all the top teams are winning because of RPO’s.  It’s also crazily hard to defeat an RPO, so if you are coaching a team, you DEFINITELY want to know how to pull these moves.”

Neville: “Is it dangerous for a coach to NOT know how to run RPO’s?”
Loyd: “Oh yeah….all the coaches in every district are studying up on RPO’s now, and if a team doesn’t know how to defend against them or run them, they’ll pretty much lose.”

Neville: “So an RPO is just a single play?”
Loyd: “Well there’s a bunch of different types of RPO’s like Inside Zone Bubble Screens, Y-Sticks, POP Concepts, Man Beaters etc). ”

I continued to ask questions as I was typing on my laptop.

Although I (Neville Medhora, Copywriter) know zero about football….I tapped Loyd’s extensive knowledge of football to write this email.  From just a few pointed questions, I ghost-wrote this email for CoachTube:

From our quick discussion about how these football coaches act and talk, I found out they talk quite aggressivelyu.  The tone of the email almost had an “internet market-y” quality to it.

The email took about 1 hour to write together with the owner of CoachTube, and it got sent out the next day.  Here were the results of that email: 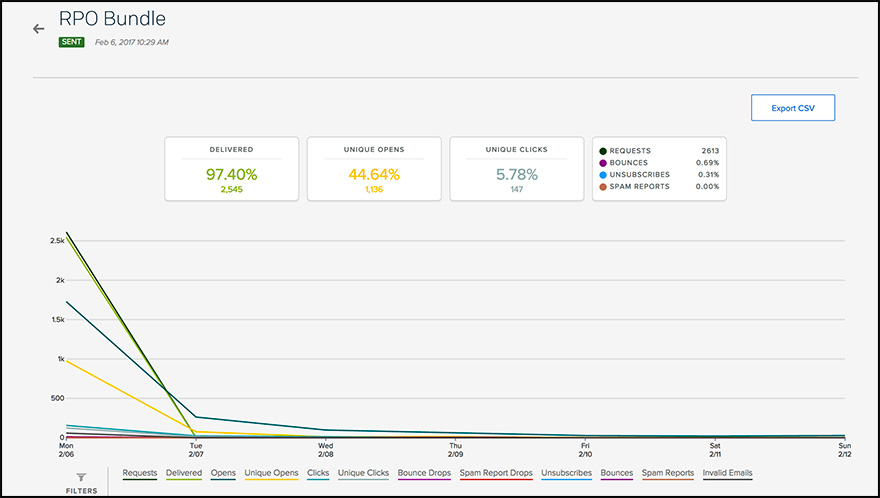 So after hastily creating an offer and quickly writing an email together, we shot out this email to 2,545 football coaches who were already signed up to CoachTube.

CoachTube had NOT been regularly sending offers like this to the coaches, and therefore we were working at a disadvantage from a “warmed up” list of emails.

When you introduce a new deal or product, most of the sales will come from the CLOSING email.  By this time people have had time to mull over if they want the offer, and the “Closer” email notifies them the offer is going away.

Already 11 people bought the bundle.  So 6 days later on a Sunday we sent the Closer email notifying the coaches the special price of the bundle (normally $125, but for now only $60) was about to end.

Here’s the “Closer” email we sent, it took about 10 minutes to write and format for sending: 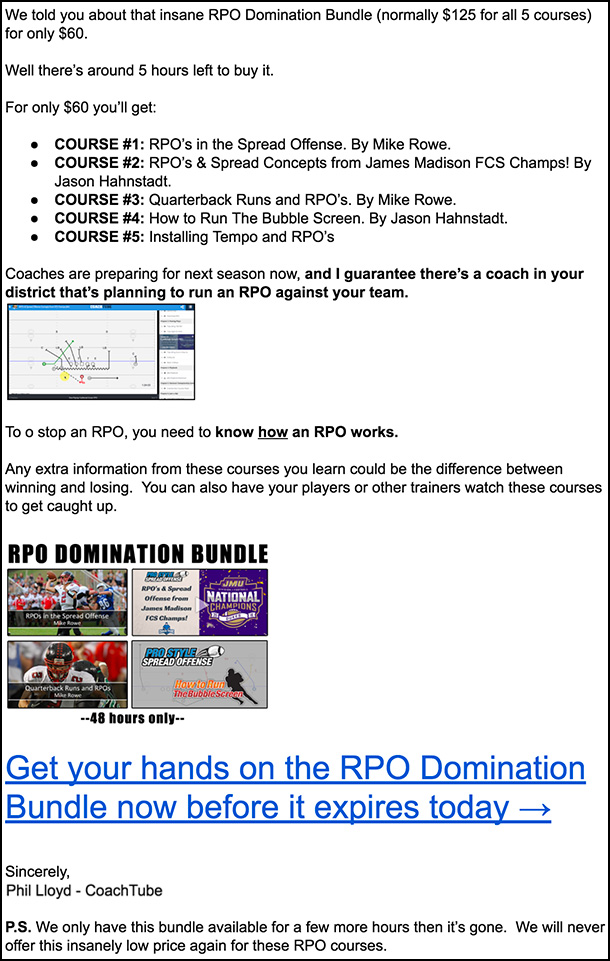 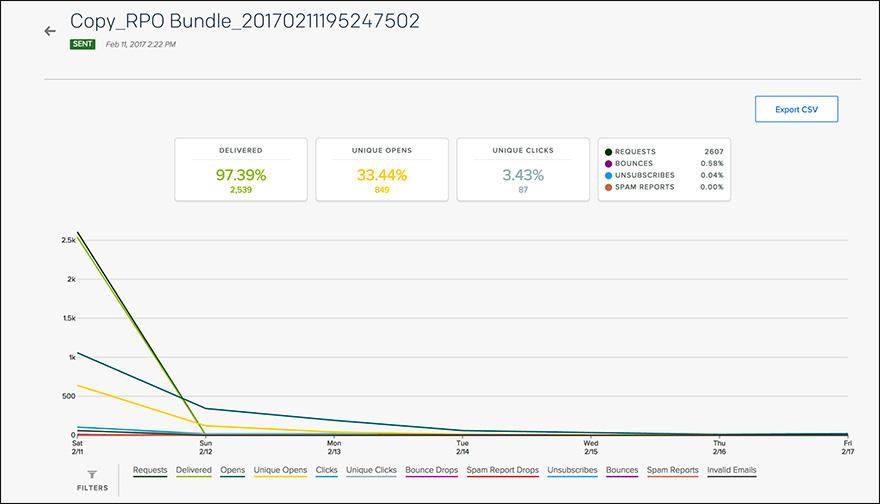 So with a very limited amount of time and effort, we were able to drum up $2,200 from existing CoachTube customers

I told CoachTube if I was allowed to publish this experiment (including all numbers) I’d just take 50% of the after-expenses profit. This deal was put together so quickly there was no time to negotiate better rates and such.

This was a small deal for just a single promotion.  For much larger deals a 50% split can mean A LOT of money.

However even a newbie copywriter could arrange to write deals like this for a split of the profits.

Instead of waiting around and hoping people buy from you….a skilled copywriter can craft an offer that brings in money…..even if they know nothing about the subject!

Hope you enjoyed this experiment and learned something!
Sincerely,
Neville Medhora – Kopywriter

P.S. A special thanks to CoachTube for letting us publish these numbers.  I do a lot of client work and get to see juicy numbers all the time, but very few places will allow those numbers to be released in public….so those cool experiments never meet the public eye.

P.P.P.S. Is seeing experiments like this useful?  Would you like me to try another subject I know nothing about….like maybe tennis??