One of the most important things I personally use in business is video calls.

As you can see by this scientific chart, video calling for work has gone up massively: 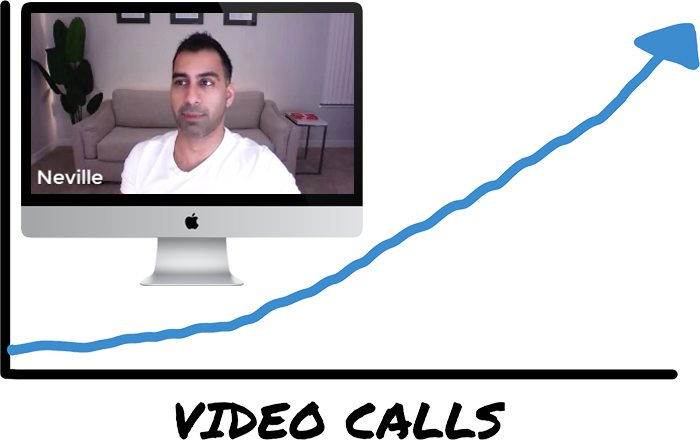 The one thing about video calls is that it’s changed the way your office should be setup!

Basically all the cool looking stuff in your office should be BEHIND YOU when you’re doing video calls.  I call this “The Reverse Office.”

Here’s all the products shown here:

At one time you would decorate IN FRONT your desk. You’d put all your chachkies in front of you so you’d have something fun to look at while working.

Now I think it’s more important to have a “Reverse Office” which showcases all that stuff BEHIND the desk so your webcam can see it.

For example this guy took some care to setup what’s BEHIND him so it looks nice for people on video calls: 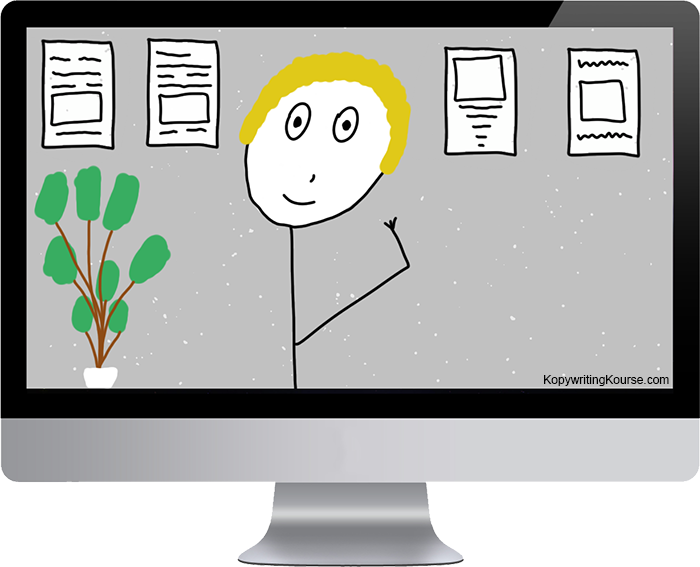 This is a “Reverse Office” where all the pretty decorations are BEHIND the camera.

Home offices used to be private, now they are semi-public because of video calls.

I’ve gone through several versions of home offices over the years, and here are some of the important rules I’ve learned about home offices:

I’ll go over these lessons below.

Getting The Lighting Right (Important)!

One of the biggest problems I had with calls was getting the lighting right when starting a video call.

If someone pays me hundreds of dollars an hour to speak with them, I at least want to make it look like I put some effort into getting the video quality decent.

I used to (and still do) use these portable battery operated LED lights to help with lighting: 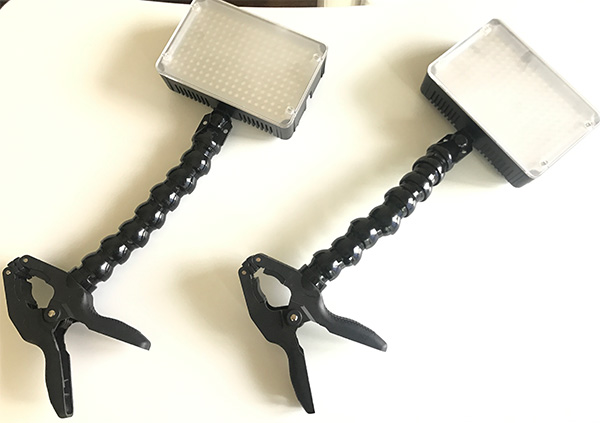 I mostly just set the lights on my desk aiming at the wall for extra light, I rarely use the clamps except when traveling.

It’s just two Aputure LED Lights with two Dinkum Systems Clamps.  You don’t need to plug them in, and you can just set them wherever. I generally aim them at a white wall and the reflected light is more than enough to light my face up.

I learned that aiming them directly at my face was a little too intensely bright and very distracting.

I also take these with me when I’m out of town so I can light up wherever I’m working.

In a previous office setup if I wanted a “city scape” background the natural lighting caused a real problem as it backlit my face so much you couldn’t see me.

Adding some portable lighting to the desk solved this problem beautifully! 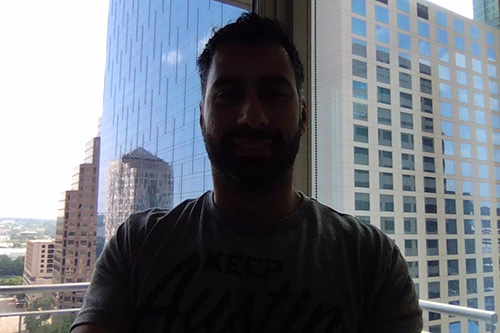 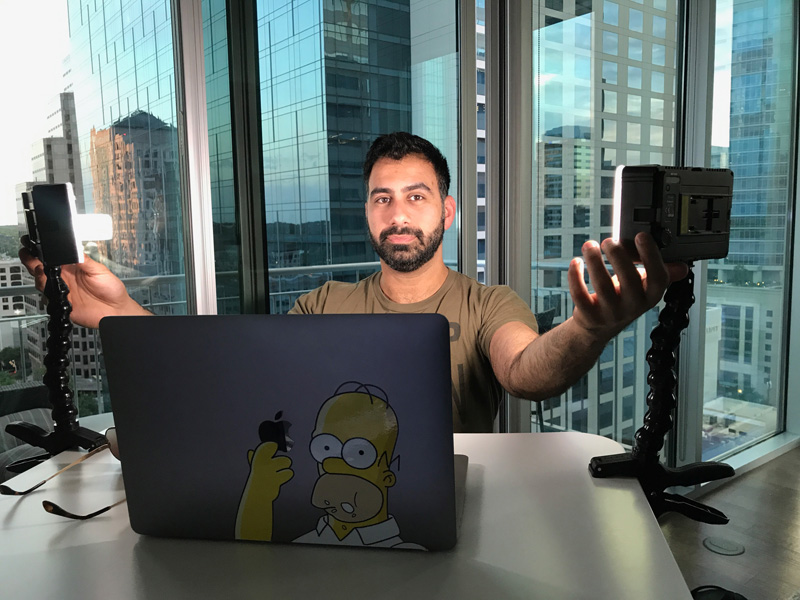 The only problem with “adding light when needed” was that you had to set up the lights each time. So for offices I now like to have a setup where I push one button and the lighting is done:

Have A One-Touch Lighting System:

Even though I loved having little portable lights handy, I’d have to take them out, set them up, and then re-charge them after every use. This added an extra layer of work for each video call.

This is what lead me to my new favorite products (I swear I didn’t mean this to be a promotion):

I already had a Phillips Hue Hub and some lights around my place, so I decided to use the Phillips line for the office.

I setup 4 Phillips Play Lights around the office: 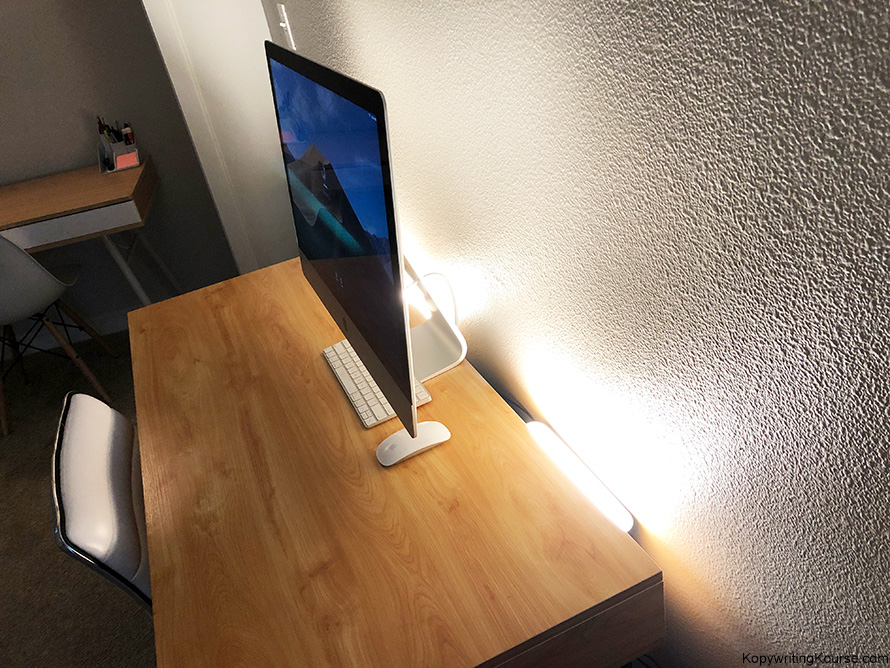 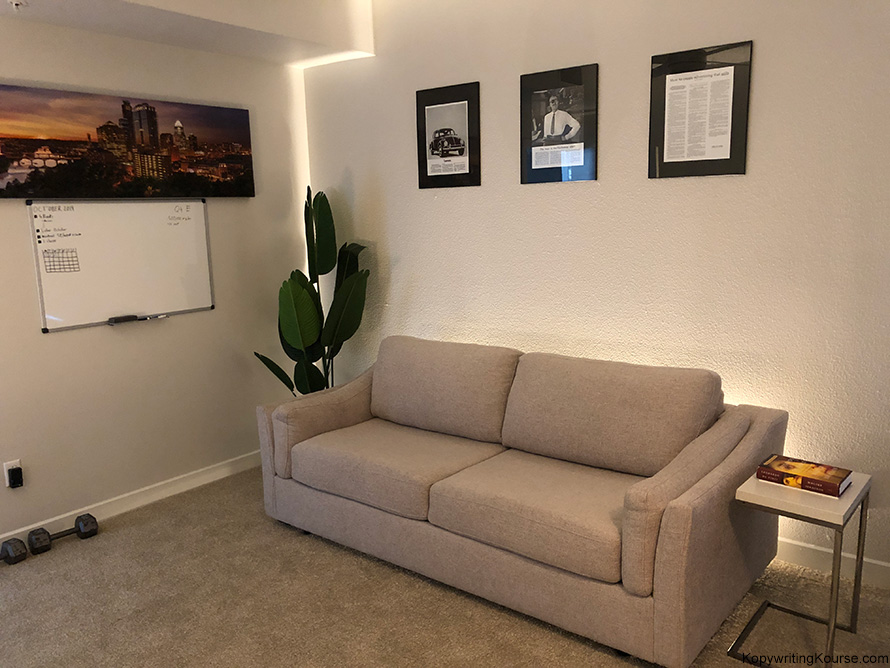 I also have a cool little Philips Hue Smart Dimmer switch that controls the light like a normal switch (rather than having to tell Siri to control the lights). 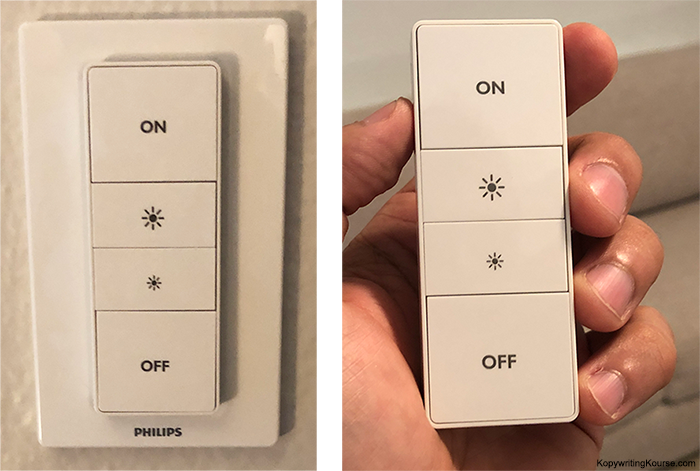 It sticks on the wall (no holes), and the remote magnetically detaches if you want.

When I walk in the office, I simply push the “ON” button, and all 4 lights automatically turn on to their optimal levels. If you push the “ON” button again it will cycle through my other light settings (Bright Yellow, White Video Call Lighting, Relax Mode, Cherry Blossom Color).

For an additional boost of light I use this Brightech Sky Lamp, which is a simple lamp with 3 brightness settings. I plugged that into a smart plug so it turns on along with the rest of my Hue lights (I like it because it retains the last brightness setting you select).

This really adds a good bit of extra lighting: 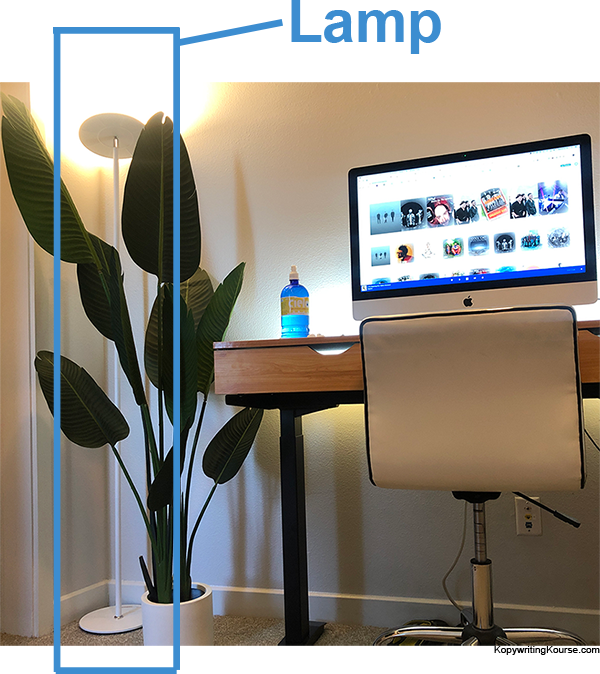 Having the lighting already setup when I walk into the office has saved me a massive amount of physical and mental energy, making video calls far easier.

Decorating BEHIND The Screen:

I suck at decorating, but I “worked backwards” and decided on the functionality of this specific home office before I bought anything.

My wishlist for the office was:

From these specs I drew out a sketch of what it would look like: 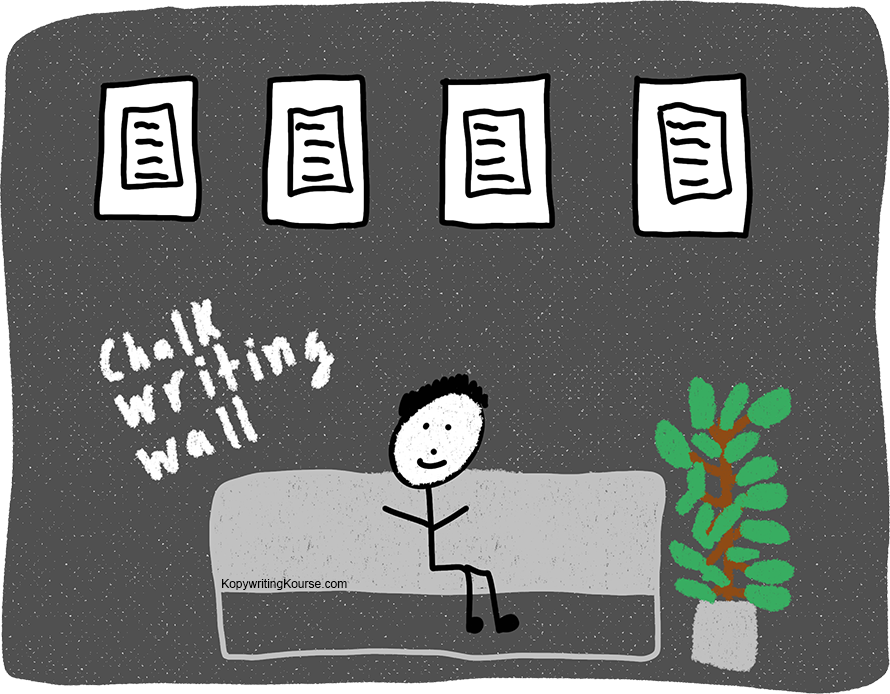 The only thing that didn’t make the cut on the final product was the chalk wall.

I found a chalk wall at a friends office, and it really made lighting much harder with the black background.

A black colored wall absorbs A LOT of light, and since my hair is black, and my face is brown, having a black background would require A LOT MORE LIGHTING to light me up properly. For this reason I took the route of least resistance and left the wall it’s white color. 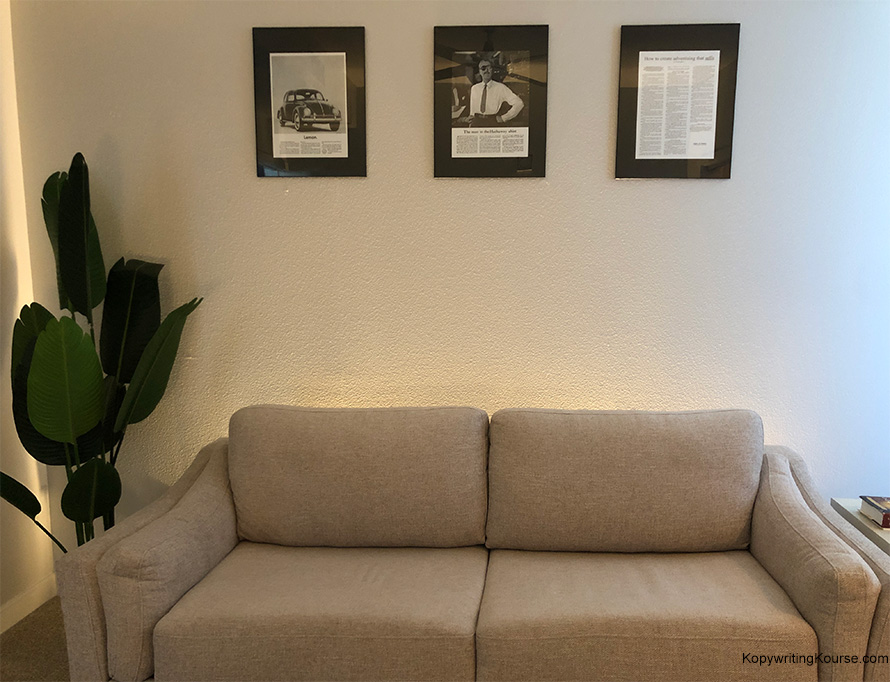 It’s simple, comfy, and does the job well!

When I flick on a video call, it looks like this through my webcam: 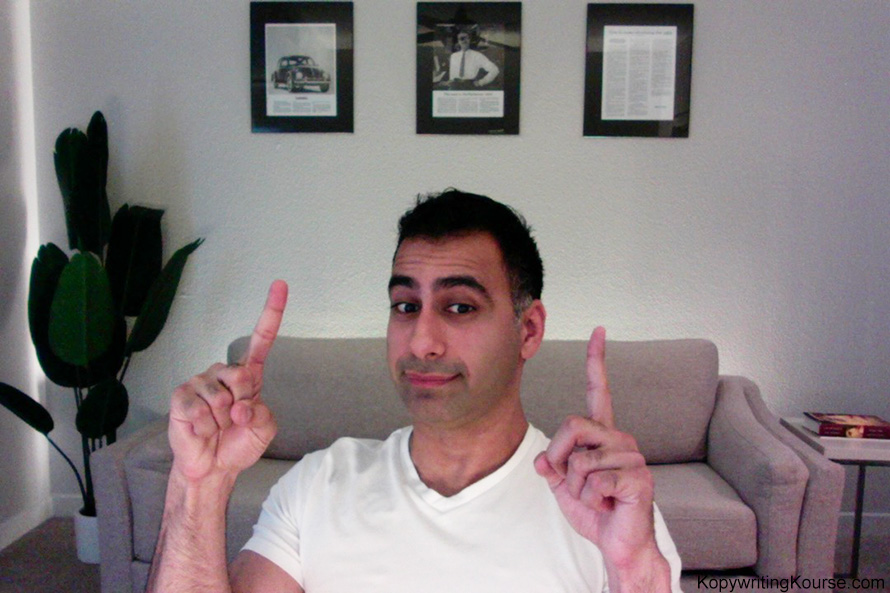 Here’s what the office looks like when you enter: 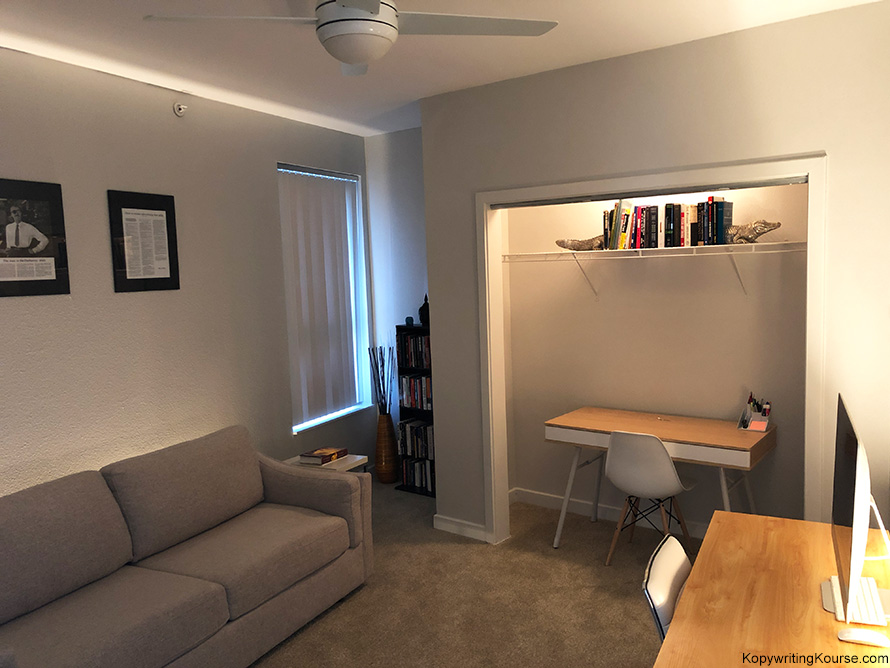 There’s a small bookshelf in the corner, and I generally leave the blinds closed since I like controlling the lighting.

This room had a sliding pocket closet, and I always hate closets with sliding doors…..so I removed the doors and put a perfectly sized desk inside of it instead. 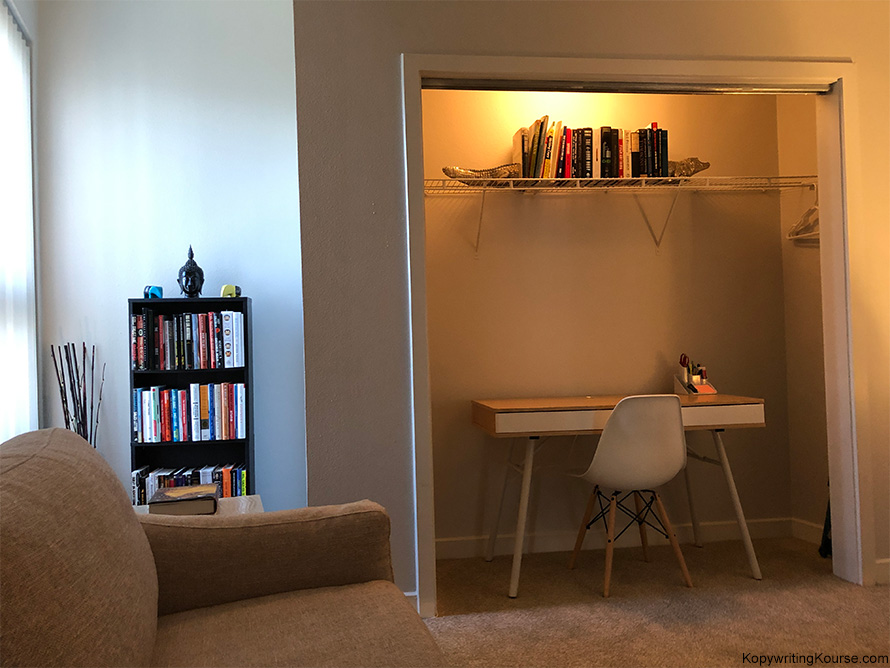 The lighting is surprisingly difficult to capture on camera, so it seems like it’s SUPER BRIGHT behind that desk, but in reality the lighting is very soft and pleasant. I just somehow couldn’t capture that on camera. 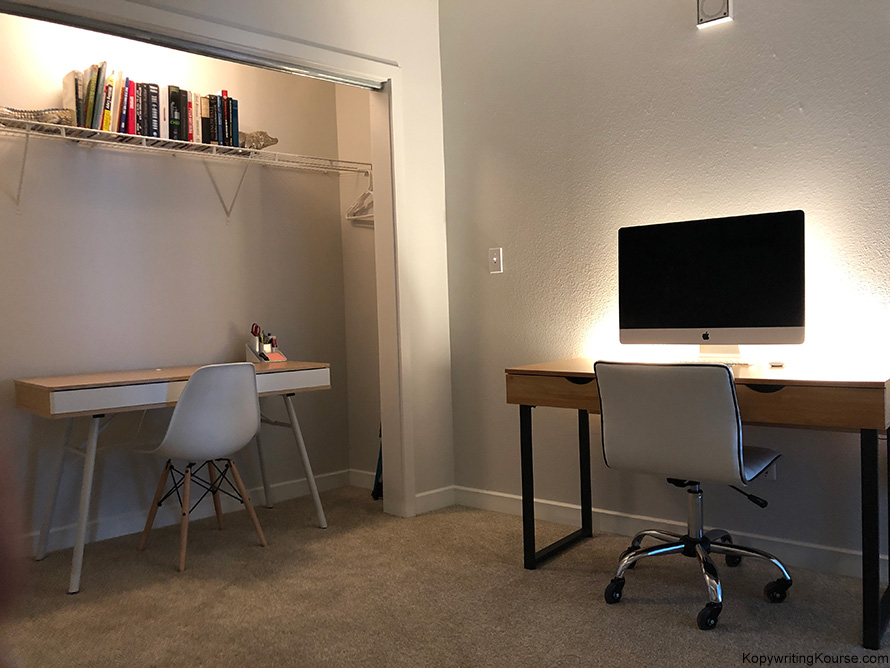 That couch turns into a queen sized bed with one motion if I need an extra guest room. There’s a nice picture of Austin hanging up as well as a dry erase board (crucial for any home office).

And of course I hung up several of my blown up Ogilvy ads over the couch.

See a VIDEO TOUR of this setup:

I also do all my Kopywriting Kourse Member Office Hours from here (if ya ever wanna speak with me directly from this very office).

Anywho hope you enjoyed this little tour of my current home office, and hope you found some useful tips in it!

P.P.S. Do you have any good tips for a home office? Any useful routines? Please share them in the comments!