I don’t care if they’re in the United States legally or not, I respect people who make the attempt to work.

If you wake up and stand in a hot/cold parking lot for hours for the chance to MAYBE get a $10/hour job doing boring ass grunt work….I respect that.

This is the daily life of day laborers.

Pretty much every single day they stand outside of stores such as Home Depot in hopes a building contractor needs some extra help.

I wondered if a little copywriting could help these guys get work quicker.

So I decided to try a little experiment………

I would like to acknowledge my good friend David Gonzales from Internet Marketing Party for his help in this experiment.  He’s a real Mexico Person who speaks fluent Mexico and 100% of the communication I had with all these guys was through him.

For this experiment he’s the Mexican Neville!

David Gonzales (This picture is completely un-altered in any way).

What We Want To Accomplish:

We’d like to see if we can help the dudes that stand on the street corner to work as day laborers get work quicker.

Whatever method we come up with would have to be:

My Hypothesis: It’s too complex and intimidating to hire from this market:

I think a HUGE problem that prevents people from utilizing these groups of able-bodied men for work is that it’s super intimidating and scary to pull up to a group of them.

They themselves don’t look intimidating, but this is what happens soon as you pull up: 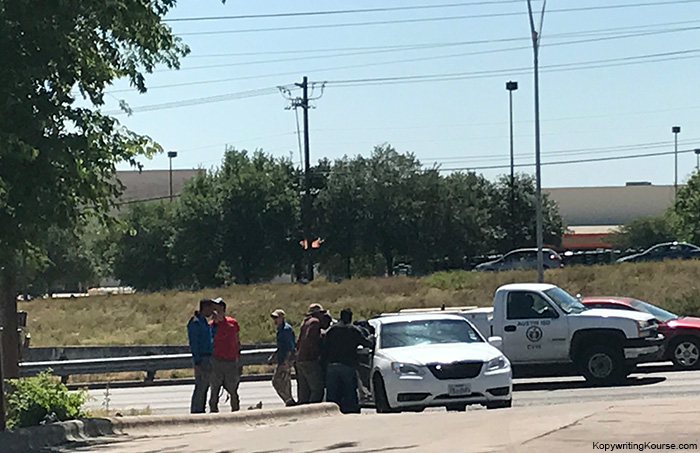 You get freakin’ SWARMED.

This is actually a SMALL group of guys who broke away from talking to us to go see if the person in this car needed some day laborers (two guys ended up going with this car).

Me and David both pulled up in black Lexus cars to a gas station, and before we could get out of our cars we both had 10+ dudes swarming each car.

I ain’t gonna lie, when 10 sorta-scrubby looking dudes surround you SOON as you park, your natural defense mechanisms go up.

If a house-mom from the suburbs wants to hire some people to paint her house, she’d NEVER IN A MILLION YEARS use this method.

It’s too chaotic.
It’s too intimidating.
It’s too uncertain.

I originally wanted to make binders showing their previous work, but this is a lot of work and money (and quite frankly, most of these guys have no specific skills to show off).

So my hypothesis was that if each guy carries a small sign with their name and basic skills listed on it, you could easily choose who to pick.

This way you can see which skills they have right away: 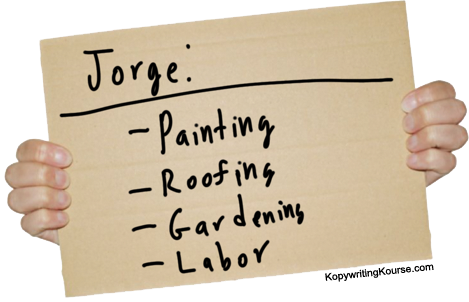 So in the beginning, I was hoping to go talk to these guys and make them all signs.  I even brought markers and paperboard in my car.

Where to Find Day Laborers:

It was kind of hard to figure out online where these guys stand.  This isn’t exactly a well-documented operation.  So we went off basic memory.  There were a few locations such as outside of Home Depot’s where these guys always hang out at.

We found an old torn-down Home Depot where across the street at a gas station these guys hang out.  So on a Wednesday morning David and I found the spot, we both pulled up into the parking lot of a gas station where these day laborers stand, and immediately were SWARMED by guys asking us (in Spanish) if we needed some help.

The demographics of these guys were:

We ended up speaking to a group of about 15-25 guys for an hour.

We had to move parking lots when the owner of the gas station forced us to leave.

There were 4 guys who were still interested in speaking with us, and talked with us for another full hour: 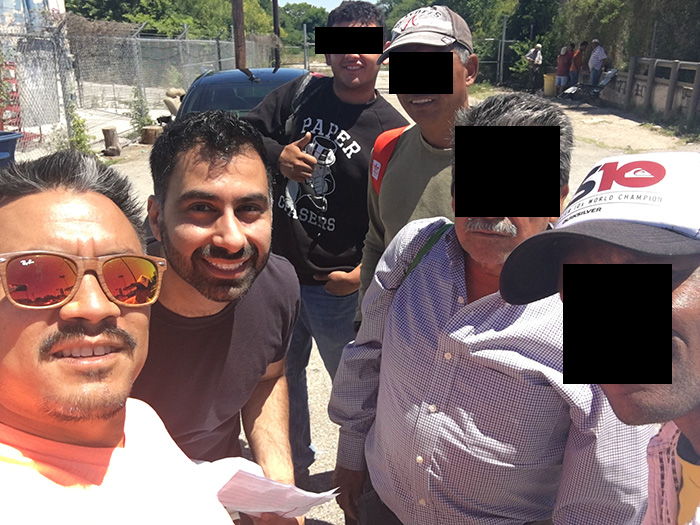 David, Neville, Laborer Dudes (for privacy reasons I chose to obscure their faces).

How to hire day laborers (The Process):

So here’s what we learned about hiring a day laborer:

At the specific corner we went to, they say about 40 people show up per day and wait around for work.  About 10 contractors or people will come through per day requesting workers.  This means about 15 – 20 of these guys will get picked up for work in a given day.  The others will not get work at all.

They would call the contractors looking for help “Jefe’s” which translates to “Bosses.”

They estimated about 30% of the “Jefe’s” (Bosses) that pick them up are genuine and good people that pay them a fair wage.

They estimated about 70% of the Jefe’s try to weasel out of paying them, or blatantly lie about the work. For example a Jefe will imply they are going to pay someone $10/hour for work, then at the end of a 9 hour workday they’ll say, “Here’s your $10” and leave.  If the worker tries to protest or ask for more, the Jefe will call immigration.

The workers essentially have zero recourse since they are undocumented workers.

Another common scam is a contractor will say they are hiring them for only 2 hours to do easy air-conditioned cleaning work inside an office building.  When they get to the job site, the contractor then makes them do backbreaking work like manually pick-axe concrete for the same price and many many more hours than agreed.

Since most of these guys sometimes have a total of $3.00 to their name, there’s not much they can do besides accept the money and do nothing.

What to Pay Day Laborers:

The standard rate for a day laborer seemed to be between $10/hour and $12/hour.  The Jefe’s they liked would pay them $10/hr for a full 8 hour workday.

If someone were to hire a day laborer, to NOT be a completely terrible person it’d be common courtesy to:

The other way to pay is to offer a set price for the work.  Maybe tell them you’ll pay $50 for someone to paint a wall or move some lumber, and they will tell you who is willing to go for that price.

How Can We Help:

OK, so we know there are problems with this broken marketplace:

As we all were talking, I kept explaining (through the translation of David) how I think they should all keep little signs with their skills on it. This idea was rejected over-and-0ver, and quite honestly, I was a bit frustrated.

There were two main mis-conceptions they had:

1.) The signs I was suggesting made them look like they were begging on the side of the road, which is illegal in that area and could get them arrested.

2.) The signs I was suggesting would take away work from their fellow day laborers.

THIS WAS A HUGE ISSUE FOR THEM.  They were shockingly loyal to one another, and anything that gave one guy an advantage over another they absolutely rejected.

I kept persisting this method wasn’t designed to screw over their friends, but rather make the whole marketplace more efficient.

So then David pulled a business card out of his pocket as a demonstration of how the sign would work, and something shifted.

When the conversation moved to them giving out business cards, they 100% agreed that would be a great idea!!

However one guy pulled out his wallet and showed us he literally had $3 in TOTAL MONEY.  He couldn’t afford business cards, or even knew how to get them made.

Well fortunately we could maybe help them with that buy either paying for their business cards, or printing them out!

So let’s try a field-test of this business card idea…..

So one thing that would help these guys tremendously is if a good Jefe needed work, he could simply text or call them for work.  100% of the guys on the corner had smartphones, so calling or texting wasn’t a problem.

It was actually a big revelation that the workers and contractors almost never traded contact info.  I explained to them how giving out business cards to the good Jefe’s would dramatically increase their chances of getting a call or text from one of them asking for more help.  Perhaps even higher-paid specialized work.

Four guys were down to try this out.  So we made some business cards for each of them.  I just bought a pack of Avery Business Card paper and printed them out manually on my inkjet printed (I purposely did not buy them online because it was 1.) too expensive for most of these guys and 2.) a lot of them don’t have credit cards to buy stuff online.

It was pretty simple to make each business card using Avery Templates: 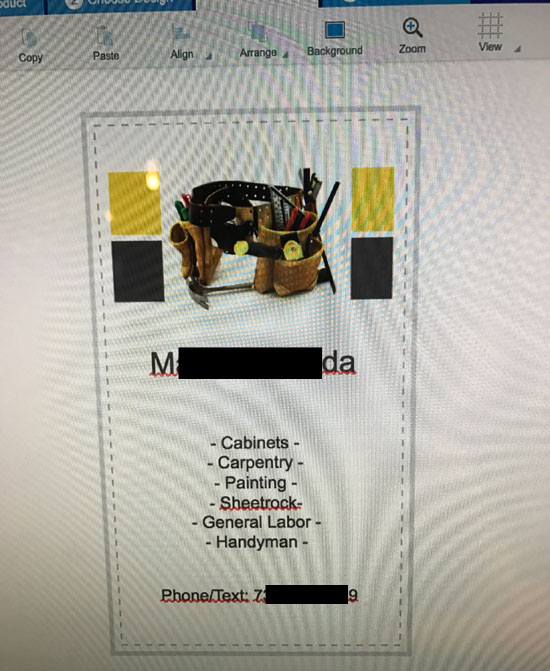 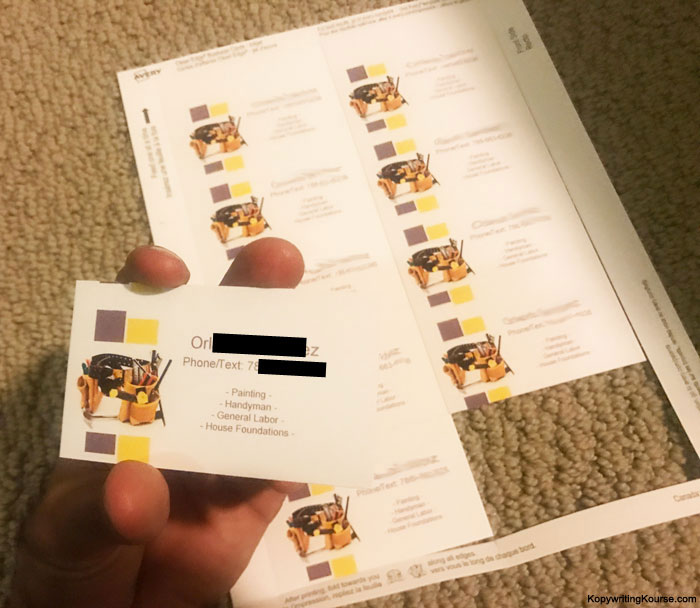 In a few minutes we got all the business cards printed: 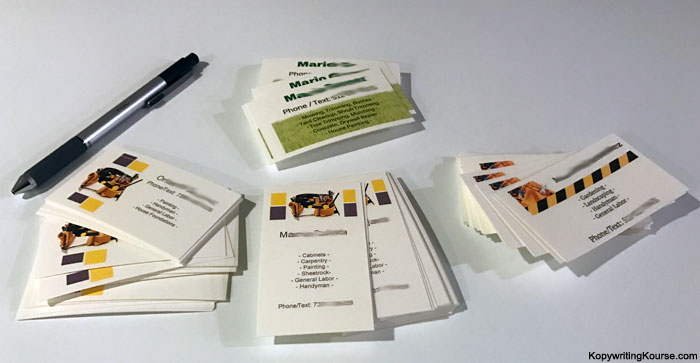 I texted the day laborer dudes asking if I could come by the gas station and deliver their business cards, and surprisingly two of them were at David’s house painting!  He was undergoing a big remodeling of his house and needed help, so he hired a couple of the guys: 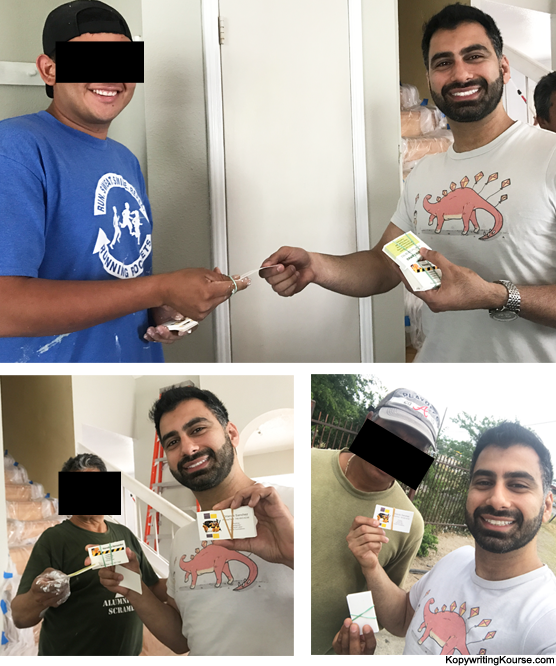 So now armed with business cards these guys can “sell” their laborer more effectively without having to be at that street corner: 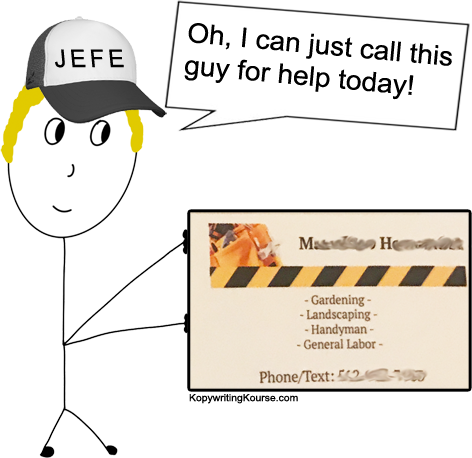 We then asked about skill level.  One guy was skilled at leveling entire foundations of houses. One guy was great at woodworking and cabinet building.

I was curious if he had photos of his work, and he was proud to show it! Here’s some pics he texted me: 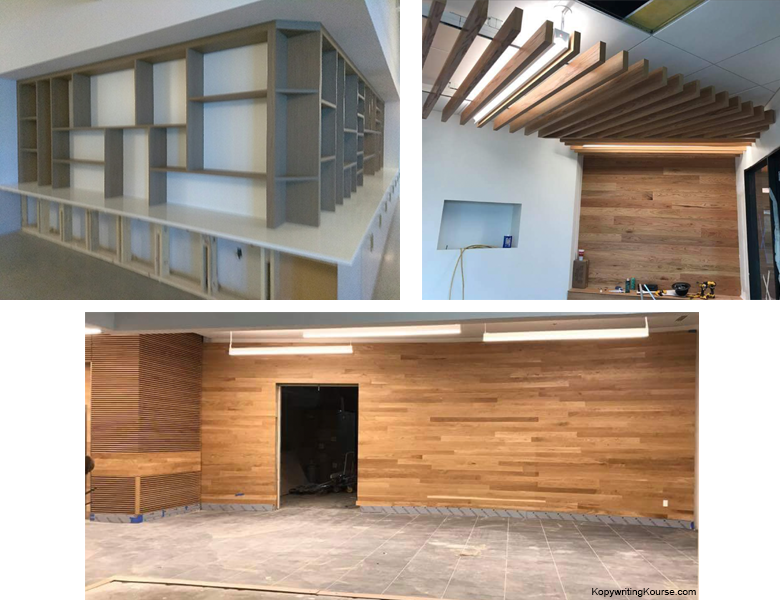 What’s interesting about this is a lot of these guys have specialized skills which go completely under utilized.  This guy can do great woodworking and cabinetry, but since his sole way of getting business is standing at a gas station corner hoping for someone who needs day laborers, he’s relegated to digging holes for fence posts and busting up chunks of concrete with a pick axe.

P.S. What else do you think these guys could do to get more work?  Let me know in the comments!