Yea so now that I realized that I could type words differently and people would buy lots of stuff from me…..I was eager to apply this newfound superpower to something else.

I repeatedly wrote HouseOfRave promotions that did very well, and I started bringing in more money from that business despite drop-shipping becoming a harder business to survive in.

There was a slew of other uses for copywriting, but my favorite part of the journey was when my good buddy Noah Kagan would come over to my apartment and co-work with me (pictured here): 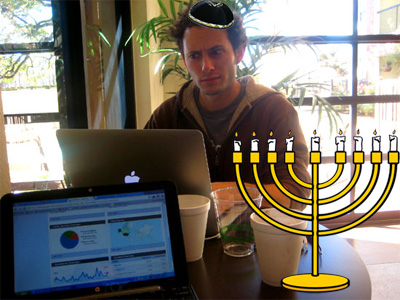 He was building a side-project called AppSumo.

And the whole business was based off of sending emails to subscribers, and presenting them an awesome deal.

And that’s all AppSumo emails were.
The selling part of the emails included really cool (and deeply discounted) deals on stuff computer nerds liked, so people were reasonably interested in at least checking out the emails…….but they still blended in with the 20 other newsletters people would get per day.

So it was at this time I convinced Noah to let me try this “Copywriting stuff” on the AppSumo email list.

HE WAS SUPER SKEPTICAL OF THIS, AND WITH GOOD REASON!!!

The first line of the original email I wrote was “If you get a boner when I whisper the word ‘Garamond’ into your ear…..you might be interested.”

This first email I wrote was also three full pages long….whereas the previous emails were not even half a page, had barely any text, and just a “VIEW DEAL” button.

So once again…….I was sending out an email that was the complete opposite of the norm.

I included the original Kernest email kopy I wrote at the bottom of the post.

Some of the original stuff I wrote was modified to make sure it didn’t set off spam filters at offices, but otherwise that was the ghetto email we sent out.  It was a complete departure from the previous email.

The day this email was sent out was the first day AppSumo made a $10,000 profit in one day.

P.S.  If you wanted to see the historic Kernest email  that went out, here it is: